As you all know by now the first official trailer for Pokémon Let’s Go has finally dropped. Many of us panicked when they announced Pokemon quest first on their Twitter account. Many of you probably thought that was the actual Pokemon switch game they were hyping up this entire time, but thankfully that was not the case and we actually got another Pokemon switch reveal. But look like what we've been waiting for which was the rumored Pokemon Let's go series.

Turns out this Pokemon Let's Go series is also not exactly the core Pokemon mainline series that we've all been waiting for. It looks very much like it and shares in many similarities but it has been confirmed by the official Pokemon Twitter account that there is a third Pokemon switch title in development that is an all-new core series pokémon RPG that is slated for the second half of 2019 which probably means November 2019.

Having said all that this new Pokemon let's go title still looks crazy good and in many ways probably passes as a mainline title in many aspects. So let's take a closer look at just what was revealed in the feature-packed 3-minute trailer and go into detail.

Just exactly what we know about the new Pokemon Let's Go Pikachu and Pokemon Let's Go Eevee games that are coming out later this year on November 16th 2018. So the very first feature they show us is that you can play with one Joy-Con. We don't know if this is a requirement that you play with only one Joy-Con but it looks pretty comfortable having only to use one hand to play. You encounter wild Pokemon in the grass just like before but this time you'll see the Pokemon pop out of the grass and then you will go into battle mode. Where we see 4 options on the screen: Get Ready, Items, Help, and Run Away. The kid in the trailer presses “Get Ready” and it looks like you go into a mode similar to throwing a pokeball in Pokemon go, except this time you time your throw with the Joy-Con to catch Pokemon. It seems like for a wild Pokemon encounters, you can now catch Pokemon without having to battle them. This may not be for all Pokemon as they only showed low level Pokemon here. So we probably should not expect all wild Pokemon to be caught this way especially with legendary Pokemon.

Nowhere in the trailer do we ever see a wild Pokemon battle like actually having to lower a Pokemons HP before catching them. So it's like the new Pokémon battle mechanic has been completely revamped into a Pokemon go style battle. But that doesn't mean fights are gone as we obviously see later. This feature is definitely gonna be one of the more controversial changes to the Pokemon franchise and hopefully when we see more of it or just more of how leveling will work with our party of Pokemon, everything will make more sense. 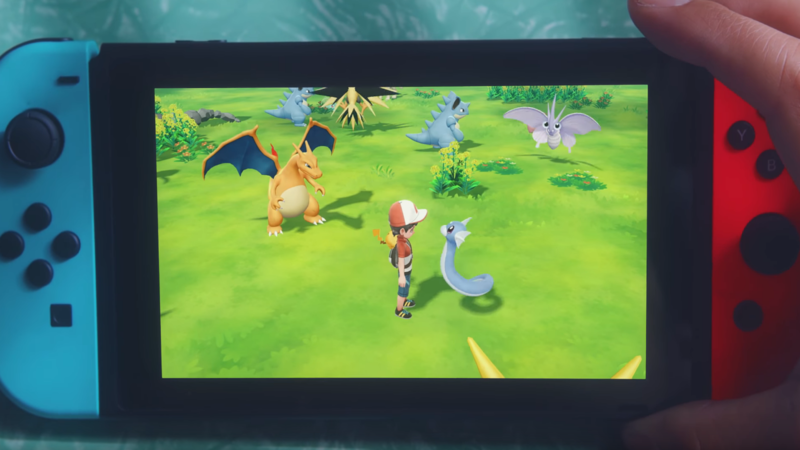 The next feature is playing with friends or in other words co-op. This is probably the most exciting feature to come to this next generation Pokemon game. By shaking the second Joy-Con, you can now add a second player to your party with both of you controlling your own character. We see them moving through town exploring caves and even catching pokémon together which seems like it gives you a better chance at capturing them as opposed to capturing Pokemon by yourself. So throwing to poke boss at the same time with your friend it will be more advantageous in your Pokemon catching. You can also battle other trainers with your friend in the trailer they showed us a two versus one battle and it seems like the combat system is very much in the same format as the older games. It looks turn-based and each move has PP just like in the older Pokemon games. So the battle system from before is still very much intact.

The next feature shown is a new poke ball accessory. The pokeball accessory allows you to control your character in the game by using the button in the middle of the pokeball as an analog stick to control your character and to click the options. You can also use it to aim and throw your pokeball to catch pokemon. So it essentially acts as a Joy-Con, but the coolest part to this new poke ball accessory is that the pokémon you catch can be put into the pokeball accessory and then taken with you wherever you go. When you save your game it looks like there's another option to take your pokemon for a stroll and when you take a certain pokémon for a stroll it will transfer into your pokeball.

You can actually hear the sound of your pokemon from the pokeball so when you shake it. You can hear the voice of your Pokemon when you move the book ball around in a specific motion. You can hear different reactions from your Pokemon. We don't know how this will affect your Pokemon in the game but if we were to guess we think bringing your put one out will help them level up similar to the way walking your pokemon in Pokemon Go! gives them exp.

The next feature shown is the Pokemon Go! connectivity. It seems like you can open go park on your Nintendo switch from your smartphone which can send Pokemon from your Pokemon Go account to your Nintendo switch game. But it looks like you can only see interact with those Pokemon in the coal park which looks like you won't be able to transfer them to your actual party in the game. You can also send a present from your Pokemon search game to your Pokemon go account. But for now they didn't reveal the exact kind of presence you will be getting. We’re guessing there would be items and such you can get from visiting Pokemon centers in Pokemon go.

The next feature is a huge feature. You can mount Pokemon and travel on them but this time they look way better than before. As you can see in onyx is in its full size when you're riding on him and you can even mount a flying pokémon like Charizard. But not only that it looks like you can always have Pokemon following you around just like in Pokemon Yellow when you're exploring and even better you can dress up your Pokemon in different clothes that will stay on even in Pokemon battles. We’re not sure if this is limited to Pikachu and Eevee, although we’re pretty sure it is else that would be a lot of clothes they need to design to fit every single Pokemon in the game.

The Pokemon animation looks way better especially in battle the effects are way more intricate than before and looks and feels like a console Pokemon game. Team Rocket is back, Mewtwo is back, and so if it wasn't obvious from the beginning this adventure will indeed take place in Kanto, the original Pokemon region from red and blue.

At the very end of the trailer we see them opening a present in Pokemon CO and underneath that it says you'll meet a special Pokemon. On the official Pokemon Twitter account they posted the special Pokemon referenced at the end of the Pokemon let's go trailer is referring to a Pokemon never seen before. So we will be seeing new Pokemon in this game after all and hopefully more than one.

After seeing all these new features and mechanics in the game we have to say as a longtime Pokemon fan ever since playing red and blue on the Gameboy, this next generation Pokemon game it definitely looks very appealing. The add on many aspects to the gameplay that encourages playing with friends, even more and gave us more ways to interact and bond with your Pokemon. We think these two features can really take a Pokemon game to the next level if done properly. So we can't wait to see more of how they work in the game it's really hard to judge whether or not they will work in the actual game because we only have a trailer but so far so good and we’re pretty happy. And as always, thanks for reading.