Today we're talking about Donkey Kong Tropical Freeze. This game was originally released on Wii U in 2014 by Retro Studios, and it's gained a second life thanks to Nintendo Switch. Well it doesn't really gain a lot of like new editions in this port or anything like that, we'll say it's still a damn good game and we'd almost go as far as to say it's a must-play for platformer fans. The general basic plot is Donkey Kong is hanging out doing his thing and celebrating his birthday with Diddy cranky and Dixie when the snowman's invade. Think arctic animals like penguins and walruses only their evil Vikings. They kick the DK family out of their home and cover it in an Arctic winter, and then it's up to you to work your way through various lands to get back and kick ass and take back your home. But what you get here is a game that it first feels like a real basic corny Nintendo platformer but it quickly becomes much more than that.

This is a game that has beauty in its simplicity but with that comes tight design that demands the absolute most of you. This is a platformer where there is no room for screw-ups controls and the general feel works as you'd expect if you play Donkey Kong Country Returns. You get different control options to choose from run, roll, jump, bop, Bongo smash and you throw and then you use your allies riding on your back to reach new heights. Cranky has this pogo jump like yoshimitsu, Diddy of course has his little jetpack boost again, and Dixie has helicopter hair. You can play co-op where one person controls a smaller character, but it genuinely makes the game more challenging not less. Now you work your way through gorgeously realized and creative levels through six distinct themed worlds. But even within each world, every level within that manages to be unique as well it's really impressive and makes the game that much more fun to play. Through each level is filled with hidden secrets to reveal hidden bonus challenge areas and the puzzle pieces and letters to collect.

There are really fun and replayable sections like riding on mine carts, rushing your way through a collapsing or moving sequence, and riding on animals that are really memorable and really kind of give the game more value. Playing through the entire thing just the main story can take you 10 to 12 hours but it really depends on how you play, because it's gonna be very different for everybody.

This game requires perfect timing and skill. Tropical Freeze is really really challenging, it is not for babies. This game will make you angry and maybe even frustrated and blaming the controls at times but it can be done using items wisely and being patient, while also just committing to moving fast will help you succeed. We think this game is actually gonna surprise some newcomers with just how challenging it really is. 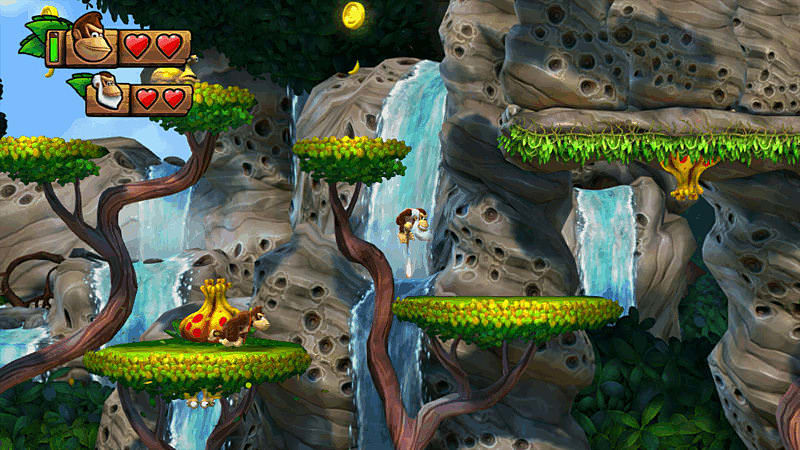 If you like having the option to replay and clear out everything by finding all the secrets, completing the spelling of Kong and the puzzle pieces for each level, give you almost an extra level of play. Because you got to really work to get all this stuff. If you're a player that really loves a challenge, those extras allow you to push yourself even harder while also just getting more longevity out of the game.

There's also funky mode starring funky Kong. He's the shopkeeper guy you come across the buy items from Tropical Freeze but only in this switch version he gets his own playable mode. Playing as him is essentially playing the game on easy mode. He has way more health and rawl, he's got a double jump and a glide and spikes don't hurt him. It feels almost like playing a completely different game but it's still worth checking out just because it's fun to cruise through levels really fast while literally kicked flipping on a surfboard. We still think it's kind of worth checking out, also we can't believe the original version didn't have this mode just for kids at least.

If you progress you do get to see some really dazzling moments and levels, and boss battles that are really grueling. There are often multi-layered and always really exciting and they have some of the best soundtrack. The game just looks and sounds great it runs at 1080p 60 docked and the resolution is much lower on handheld, but I didn't notice it too much while playing. It's bright, it's vibrant, everything is moving and it's just a blast to look at and listen to and play through (at least when you're not throwing your controller across the room). Topical Freeze feels like one of those old-school challenging games that require absolute mastery and almost memorization of every level or every boss fight. It's a refreshing thing to play on the Nintendo switch right now, we would definitely consider it.

We give this some pros some cons and some personal opinion and now we definitely want to hear yours down in the comments section below.